Design and implementation of a heritage rest house in the UAE

About our project to design and implement a heritage rest house in the Emirate of Sharjah, United Arab Emirates

The heritage lounge consists of three master bedrooms / master hall, an American kitchen and four bathrooms with a total area of 220 square meters Building system followed reinforced concrete bases, ground bridges, bricks, overpasses, and the roof of the sandwich panel with a thickness of 10 cm with the addition of layers for water, heat and sound insulation

Photos of the executed break (click on images to enlarge) 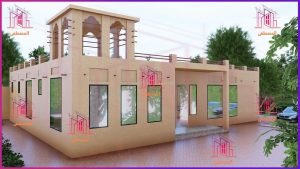 About urban development in the United 🇦🇪 Arab Emirates

The state of architecture of the United Arab Emirates has undergone a major transformation in recent decades, starting with the sixties and seventies of the last century, initially the architecture in the UAE remained only traditional, with the nature of narrow alleys and houses of the wind tower / Baragil reflecting a strong Bedouin heritage.

Until the early seventies, Sheikh Rashid bin Saeed Al Maktoum, the ruler of Dubai, chose British architect John R. Harris to create the elegant modern architecture that the major cities of the United Arab Emirates are famous for today.

Such as the introduction of exposed glass curtain walls are initially widely used in the design of almost every high-rise commercial building façade in the Arabian Gulf region, But Emirati heritage architecture still largely reflects the traditional customs and lifestyles of the indigenous people. The building materials are simple, unlike the duplicate images of Dubai and Abu Dhabi today.

-Traditional influences: The traditional architecture of the United Arab Emirates has been strongly influenced by the desert landscape, culture, lifestyle and building materials available. The example of the Bedouins, a Bedouin Arab tribe traditionally living in the desert, is famous for using palm frond shelters, known as arish in the summer months. In the colder months, a step is taken towards the use of shelters for animal skins. The Bedouin tent was a useful and adaptable structure that was often made of sheep's wool, camel hair or goat hair by the women of the tribe. Such structures were called the House of Poetry, that is, the "House of Poetry".

-The emergence of heritage buildings

Nomadic nature required the need for light materials, the interior permanent houses were built with a mixture of clay formed into bricks, reinforced by the use of cohesive stones with a mixture of red clay and compost. Depending on the geographical context of the tribe or group of the type of material that was used in the construction of buildings, which meant that most of the structures were made of materials taken from the surrounding environment. These species ranged from coral, clay, stone, linen and palm leaf.

The need for inventions such as barajeel arose due to the harsh climate of the United Arab Emirates and the need for ventilation due to periods of high temperatures during the year. This led to the introduction of wind towers from neighboring areas, known as "Barjeel". These vertical columns allow the rapid flow of cold air with an increase in its speed by 50% to 70% and the distribution of water to become available at the bottom of the structure, allowing the internal temperature of the building to be cooled and so on.

"🇦🇪 In the end, we say the architecture and style of construction for each country is part of the culture, and it is for each country because it indicates originality and tradition, as is the case in the United Arab Emirates." It is not possible to depart from them talking shapes and different design, but we agree on their attractive appearance and unique splendor.